Behind The Book – The Warrior’s Touch 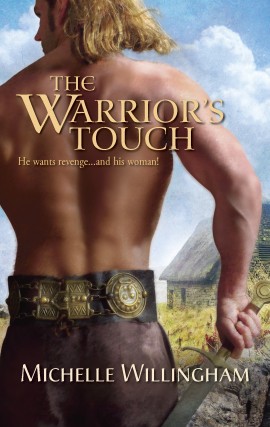 During the long wait on Her Irish Warrior, I received revision requests on the complete manuscript. After making the revisions and sending them back, I was left with nothing to do except write another book. I found that Connor MacEgan was one of my favorite MacEgan characters. He was a flirt, had a devilish smile, and could win the heart of any woman. He was a perfect man.

Which meant, in order for him to grow as a character, he had to be broken down. Literally, I had one of his flirtations go too far and the angry father tortured Connor by crushing his hands and breaking his wrists. For a warrior who depended upon his sword to protect himself and his family, this was a horrifying fate. Fortunately for Connor, he was found by a beautiful healer . . . and a woman who holds secrets of her own.

Aileen O’Duinne lost her heart–and her innocence–to Connor as a young maiden. He was her first love, and she never forgot him. When she finds Connor injured, she heals his wounds, but he’s angry about having lost his ability to fight. He wants to heal faster and despite Aileen’s skill, he lashes out at her when his hands aren’t recovering quick enough. He falls into despair and doesn’t know how to become a different man when he can no longer use his hands.

My brother doesn’t have the use of his hands. Born with physical disabilities, he cannot hold a pencil or write well. He can’t cup his hands or tie shoes. But it doesn’t make him less of a person. Instead, I admire him more for what he can do, in spite of his problems. His strengths are far different from ordinary people, and his memory is astounding.

I wanted to explore a character in fiction who suffers the same troubles but who overcomes them in his own way. Not only that, but he learns to love a woman who sees beyond his broken hands to the man beneath it all.

You can read more about The Warrior’s Touch here or join the discussion on Facebook. (P.S.–it’s on sale for 99 cents, for a limited time on Amazon).