Behind the Book – The Accidental Countess 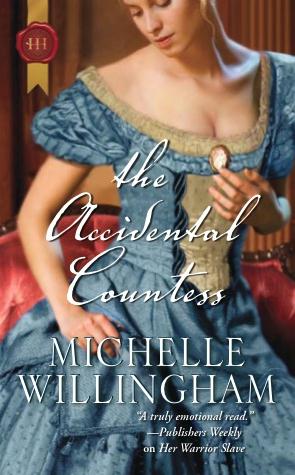 After writing Her Irish Warrior (and awaiting a decision from Harlequin), I wanted to try a different time period entirely. I also hoped to write a longer single title book that would be different from anything else I’d written.

I love to bake and have enjoyed it since I was a girl. I own several Victorian era cookbooks, and I decided to give my heroine a love of cooking as well. At the beginning of the chapters, I put quotes or recipes from Emily Barrow’s fictional cookbook–recipes that were adapted from real historical recipes (or receipts, as they used to call them). In order for readers to be able to actually bake the confections, my editor and I converted some of the measurements. I baked several of the recipes and adjusted measurements along the way. It was a conscious choice to make the novel work as a cookbook, as well, and this is why I adapted the primary sources into measurements a modern reader could use.

Emily Barrow is a very strong-willed, unconventional heroine. What’s interesting to me, as an author, is how readers react to her. There seems to be no middle ground whatsoever–readers either love her or despise her. I never imagined that there would be such violent opinions on this book, but reviews tend to be skewed from one end of the spectrum to the other.

I also incorporated a mystery element in the plot (It’s essentially a Cinderella story after she marries her Prince Charming–only now, he has no memory of her OR the marriage.). I had a vague idea of who my villain was, but in order to make the writing more entertaining for myself, I didn’t make a decision until near the end of the book. In some ways, I think it helped the whodunit element, because *I* didn’t know whodunit.

The Accidental Countess was an early book of mine, written before I’d published anything. I broke a lot of rules, wrote with abandon and just had fun with it. Although it was completed in 2006, my agent shopped it around in 2007. I gave birth to my third child in the fall of 2007 and due to some heavy revisions on Her Warrior Slave, I found myself woefully behind on the next book that was due only three months later. Since I was teaching full time, I had only one option to meet that deadline–send the full manuscript of The Accidental Countess to my editor at Harlequin. I did sell it in early 2008, but I knew it would be a long time before it would see publication.

We ended up holding on to the book until 2010, because my editor wanted me to write a second Victorian manuscript to go with it. I wrote The Accidental Princess in the meantime, and both were published back to back in February and March of 2010.

This book is one that I sometimes want to shield from criticism. If I had to go back and rewrite it, I might soften Emily a bit more. But 2006 was a time of experimenting for me, of trying new things and learning what worked and what didn’t. That’s a necessary part of developing your author voice. Yet I know many readers who do love this book and the rest of the series. It *is* different from my MacEgans and my later books because *I* am a different author now than I was, years ago.

Will you love it or hate it? That’s entirely your choice.

View more details about the book here or join the discussion on Facebook.