Behind the Book – Her Irish Warrior 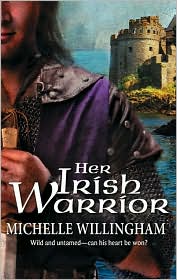 After my first manuscript was rejected and set aside, I decided to try a new way of writing romance. Instead of creating characters and a set of events that happened to them, I decided to write a story about broken people. REALLY broken people. I killed off my hero’s first wife and child and made him a brooding Irish warrior. He had also witnessed the death of his eldest brother and was unable to save him. Bevan MacEgan had emotional baggage with a capital B. He was one messed up man, and I loved him immediately. But what kind of heroine should he have? A bold Irishwoman wouldn’t work for this man. He needed redemption after being unable to save so many people, and so I created Genevieve de Renalt, a woman desperately in need of a rescue.

Like Bevan, Genevieve had her own problems. Not only was she a Norman bride brought over to wed another man who had claimed Bevan’s land, but she was struggling to find the courage to leave her betrothed. When Bevan does help her escape, he’s haunted by memories of his first wife, and he keeps her at arm’s length. Genevieve is attracted to this man, but he wants nothing to do with her, aside from getting his land back.

Instead of crafting a story about events, I chose specific incidents that would push them to overcome their past. Bevan needed a chance to succeed in protecting someone. Genevieve needed to find her sense of self-worth. And when both of them are pushed to their limits…when he receives word that his first wife might not be dead after all, their love faces the ultimate test of all.

When I finished the book, there was something special with this story. It was different from all the other manuscripts because the conflict came out of these two people. It felt as if this book had a chance to be published. And still, I received rejections from many publishing houses. Some wrote notes that they really enjoyed the story but it wasn’t quite right for them. I got a request from Harlequin, and mailed off the book while working on an entirely different story (The Accidental Countess).

The book was also rejected by Harlequin. I was upset by this, but realized I could also try the Mills & Boon division of Harlequin in the UK. Only later did I learn that Mills & Boon had taken over the Harlequin Historical line. I worried that I would receive an instant rejection, since the New York office had turned it down. To my surprise, I received a revision request.

I made the changes, sent it back, and received a second set of revisions. Then a third, a year later. During this time I also wrote The Warrior’s Touch. I met the editor who had my manuscript, at the Atlanta Romance Writers of America conference. I was terrified to ask about the status of the book and learned that it had been passed up to the executive editor (the last step before a sale). She was so warm and friendly, I was crossing my fingers. There were a few more changes to make, she told me, and when I asked on a scale of 1-10, how extensive they were, she said, “Oh, about a 4.”

They were an 11. Not in terms of tons of work, but because I had no idea how to make the opening more character-driven. I poured everything I had into those opening chapters, adding more to what the characters were thinking and feeling. I tried to make Genevieve’s fears more real, more terrifying. And when I sent it off, I had nothing left to give.

On September 15, 2006 at 10:03 in the morning, my editor called and offered to buy the book. Her Irish Warrior was published in May of 2007. It will always be special to me, because it was my first book. And it’s still funny to me that Harlequin both rejected and bought this story.