Behind the Book – Her Warrior King 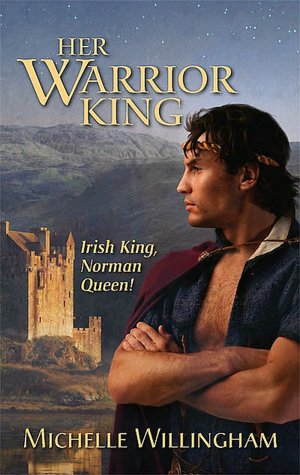 It might surprise you to learn that Her Warrior King was the first MacEgan book I wrote. Inspired after a trip to Ireland in 1993, I kept wondering why I hadn’t seen more Irish medieval romances. Scottish medieval stories were everywhere–why not Ireland? The story idea kept turning over in my head, but I put it aside for many years because I had no idea how to write a full-length romance. I had tried earlier with a Western, but ultimately I never finished that manuscript. It was full of flaws, plot holes, and wooden characters.

Finally, I decided to write the first draft of Her Warrior King. I named it My Wild Irish Rogue as a working title and set to work crafting Patrick and Isabel’s story. I’ll admit, it was a lot of fun. I loved Isabel’s spirit and Patrick’s brooding ways. I threw myself into the book, inventing all sorts of disasters to befall them. In the end, I finished the story and realized that it, too, was a disaster. There was no love story. It was nothing but a series of misfortunes, strung along through 350 pages. Neither character developed or changed, and although I submitted it for publication, it was rightfully rejected.

I learned a great deal from that failed book. For the first time, I understood that at the core of a romance, it was about two people putting aside their past to fall in love. I put Her Warrior King away and began writing what would become Her Irish Warrior. That book went on to sell, and I continued writing the MacEgan brothers, with The Warrior’s Touch. But I never forgot about Her Warrior King, and I kept wanting to go back to Patrick and Isabel. I loved these characters, and although the manuscript was awful, they deserved a book of their own.

I threw out all of that book except the first two chapters and wrote a brand new book for them. This time, I focused on how Isabel was trying to make the best of her new life as queen and how Patrick kept trying to shut her out. I kept the emphasis on a lonely woman who was attracted to this fierce Irish warrior, and how she desperately wanted to fit in. He, too, was a tormented hero who didn’t want to love the daughter of his enemy. He was torn between choosing the needs of his tribe and the needs of his heart.

It was a better book this time. And it sold to Harlequin Historical, after I’d already published Her Irish Warrior and The Warrior’s Touch. Many people often wonder why the books were published “out of order,” and although they can be read in any order, this is why. It’s because the first version of Her Warrior King didn’t deserve to be published. I learned from my mistakes, and thankfully, that first manuscript draft will never see the light of day.

Sometimes characters stay with you and demand that their story be told. Patrick and Isabel fit into that category, and I’m glad I tossed out that early manuscript to write the one that suited them best.