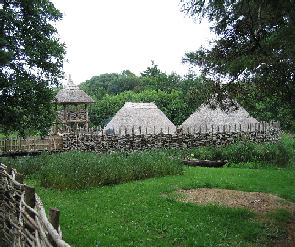 Many of you have asked me about the fostering system in medieval Ireland, so I’ll give you my notes on what I’ve read.

All children in Ireland were sent off to be fostered. Girls were fostered until the age of thirteen or fourteen, after which time they would marry. Boys were fostered until the age of seventeen, and likewise, they would be married. And incidentally, marriage laws in Ireland were much closer to our modern laws, with couples being able to go their separate ways at will. Women could take back exactly what they brought with them to the marriage, if they divorced. Couples could also handfast for a year and a day, in a temporary marriage that they could dissolve at the end of that time period with no recourse. It was as if the marriage never happened, if the couple chose to part.

Fostering was a way of bringing families together and uniting clans. It created alliances, and parents typically didn’t mind fostering so much, because they would often foster the children of another family in return. Often children were fostered by their maternal uncle or another tribe member. They could also visit their children and see them any time they wanted, as long as they were fostered nearby. It’s said that children were often closer to their foster parents than to their birth parents.

Children were also raised in the manner of their social class, and this was reinforced by the food they ate. A farmer’s son would be raised on plain porridge, while a chieftain’s son would have porridge with milk and butter. A king’s son would have porridge with cream and honey. Each child was sent to his/her fosterage with gifts such as cattle or other belongings that were given to provide for their care. I’ve seen different references on how old the child would be, everything from children being fostered once they were weaned, or at the age of seven. My guess is that it was a parent’s choice. Keep in mind that most people in the medieval era only lived to the age of thirty-five or so, and you can imagine that a teenager was really a mini-adult. That means that a seven-year-old was much more capable back then, than today.

Hopefully this give you an idea of the social structure. Any other questions you’d like me to answer?