Extra Features – The Round Tower 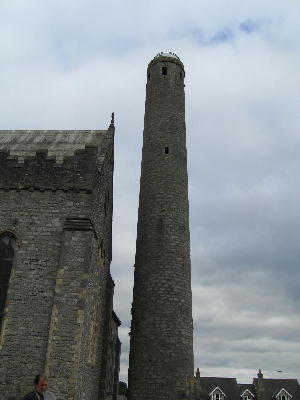 In Her Irish Warrior, Genevieve and Bevan flee the ring fort of RionallÃ­s and seek sanctuary in a round tower. This is a photograph I took in the city of Kilkenny, Ireland. The tower dates from the 9th century, and is similar in architecture to the one in my story.

Round towers have been around for over a thousand years, and some of the early ones have been dated from the 8th century. Many people debate on what their true purpose is. Typically churches are built next to them, and priests would use them to hide religious treasures. Others believe that they were a show of strength, to prove their power to rival clans and tribes. Since most had bells at the top, they could also be used to sound the hours or give a warning. 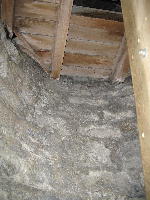 This is a photograph I took inside of St. Canice’s Round Tower. The floor is a reconstruction of the original, but the diameter is fairly narrow (approximately 8-10 feet wide). Certainly it would be an intimate space! I counted 8 levels to the top of the round tower, and there were no windows on the lower levels. At the second to last level there were six windows, creating a panorama effect. It was incredibly windy at the top, and you could see all across Kilkenny. In medieval times, I could easily imagine my hero Bevan MacEgan looking out the windows to keep watch for the enemy.

Last, here’s a picture of the entrance to the round tower. You can see that it was quite high off the ground. A rope ladder was typically used to gain entrance, which could then be pulled up behind the occupants.