Researching Seduced by Her Highland Warrior Part One 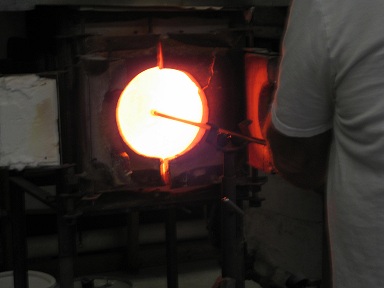 When I first started writing Alex & Laren’s story, I knew nothing at all about making glass. I wanted Laren to be a stained glass artist (although that was typically done by monks), and it meant I had to find a reliable source on medieval glass. Since she lived in the early 14th century in the Highlands, unless she traded for the glass, she wouldn’t have had a reliable source. Back then, it was easy for glass to break or for colors to come out wrong, so it made sense for Laren to be her own glass artist.

I started with a reprint of a medieval treatise: On Divers Arts, by the monk Theophilis. In the book, Theophilis gave detailed instructions on the various furnaces that were needed. Laren couldn’t possibly have built these herself, so her predecessor, a priest named Father Nolan constructed them over the period of many years with the help of other men. By making her Father Nolan’s apprentice, her secret of glass making could be kept. The character of Father Nolan was always a bit of a hermit to me, and he likely wouldn’t have admitted that he had a woman as his apprentice. He isolated himself from the rest of the clan, living in a cavern on the far side of the loch.

Several furnaces are required for glass making. They would melt the mixture of ashes, lime, and sand using clay pots which could endure the high temperatures. I visited Art of Fire, a glass making company in Maryland, in order to better understand how to create glass. I learned that at least three different furnaces were necessary-one to melt the glass, one to reheat the glass while blowing it, and another to anneal the finished product (annealing means to place it in a lower temperature oven, so that it can cool gradually. If it cools too rapidly, the glass can crack or form an irregular shape).

After visiting Art of Fire, I realized that it was critical for Laren to have at least one apprentice who could keep the fires going constantly. It took hours for the fires to be hot enough to melt glass, and even then, they would have to constantly tend the furnace. I created the character of Ramsay, a young teenage boy, who was antisocial and obsessed with perfection. His attention to detail and his desire to be away from everyone else, made him perfect to tend the fires.

Above is a picture of one of the furnaces from Art of Fire. You can imagine for yourself, what the medieval version would have been like. In my next entry, I’ll talk about how colored glass was made.