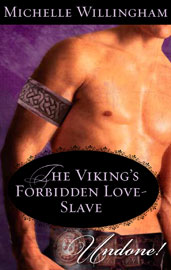 Available in eBook only. Buy on eHarlequin or Kindle.

Need help with downloading an e-book? Click here for instructions.

From the story “The Viking’s Forbidden Love-Slave”
Copyright Â© 2008 by Michelle Willingham
Â® and â„¢ are trademarks of the publisher.
The edition published by arrangement with Harlequin Books S.A.
For more romance information go to: http://www.eHarlequin.com/