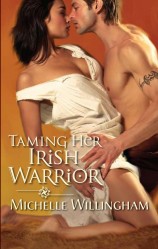 From Taming Her Irish Warrior.

The thief was among the suitors who had come for her sister; Honora was certain of it. With so many strangers, it would be simple enough to avoid notice. She’d waited many hours until darkness shrouded the castle once more.

In the ebony cloak of night, she moved soundlessly. Past the guards, keeping to the shadows while they conversed and played games of dice.

Find the chest, find the thief. It was as simple as that. Already, she had searched the Hall, but there was no trace of it among the low born knights and retainers. All that remained were the private chambers, reserved for guests of noble birth.

Not a sound did she make when she entered the first chamber. After searching the men’s belongings, she found nothing. She slid against the wall, moving towards the next chamber. Ahead, she spied the guard standing by the staircase. Honora held her breath, praying he wouldn’t see her. Her father would murder her if he knew what she was doing.

When she reached the next chamber, she opened the door. Inside, silence permeated the space. She moved closer to a pile of belongings, staring at the shadows for a glimpse of the chest. Abruptly, someone grabbed her. His hand clamped over her mouth, the other arm gripping her waist as he spun her around.

Honora fought, kicking at his legs, but he lifted her up, pressing her back against the wall. A blade of moonlight slipped from behind the clouds, casting a beam upon his face.

She froze at the sight of Ewan MacEgan. By the Rood, she’d never thought to see him again. What was he doing here? His sculpted bare chest gleamed silver, his pectoral muscles rising and falling as he breathed. Her heartbeat pounded, her skin prickling with gooseflesh, despite the warm summer heat.

‘Looking for something?’ he accused. His muscles did not appear taxed in the least by her body weight. The last time she’d seen Ewan, he’d been a gangly boy of sixteen. Tall and thin, she remembered him as an awkward fighter, driven to succeed. He’d trained night and day, struggling to gain expertise.

The boy had become a man. A handsome one, at that. His dark blond hair was cut short, emphasising a lean face and a strong jaw line. Broad shoulders revealed a tight strength she hadn’t remembered. Ridged muscles lined his abdomen, down to…

Oh, dear God above. He was naked.

With that, every coherent thought left her. She gaped at him, unable to stop herself from stealing a long look. Her husband had never looked like this. Like a savage Celt, Ewan had a wildness about him that made her uneasy.

He eased her down the wall, still holding her wrists trapped. She had stopped struggling, too disconcerted at being near him. He released one wrist and ripped her hood free.

She couldn’t gather up her thoughts to answer.

‘Who are you?’ he demanded.

Her tongue caught in her throat. Didn’t he remember her? After all the years she’d humiliated herself, tagging along and trying to defeat him in swordplay? But then, the darkness hid her features from him. He couldn’t see her clearly.

Anger surged through her. No, she wasn’t her beautiful, saintly sister. He ought to have figured that out, from her unexpected entrance into his chamber. Her sister wouldn’t dream of entering a man’s bedchamber, much less hunt a thief.

Before she could deny it, his mouth came down upon hers. A shocking sensation rushed through her skin, as though every part of her had caught fire. She forgot what she was seeking, forgot what was happening. The world around her crumbled, with nothing else, save his kiss.

She didn’t know how to respond, and her lips remained frozen. Gentle and coaxing, Ewan slid his hands through her hair. His powerful thighs pressed up to her body, the hot length of him suddenly reminding her why it was unwise to awaken a sleeping man.

His hands caressed the hollow of her back, slipping beneath the man’s tunic she wore. A light shiver rose up on her skin while his hands roamed her body, caressing her as though she were made of silk. The touch of his rough palms aroused her, and an aching warmth bloomed between her thighs.

The unfamiliar sensation caught her without warning. His rough palms stroked her spine, and she longed for his hands to move upwards. To fill up with her breasts, easing the heaviness and the shocking need. Never had a man touched her in this way. Especially not her husband.

The memory slashed through her, shattering the moment. She pushed him away, her lips swollen and her body restless. ‘I’m not Katherine.’

She nodded, not trusting her voice. She reached for her dagger, but discovered it wasn’t there.

Ewan raised the blade, the steel reflecting in the moonlight. ‘Looking for this?’

‘I didn’t even know you were here,’ she protested. ‘I came looking for-‘ She almost said a thief, but silenced herself. For all she knew, Ewan was the thief. Doubtful, but she could not rule it out.

‘Looking for your husband?’ he queried. Accusations filled up his voice, as though she were a little girl caught stealing sweets.

‘My husband is dead.’ She pulled his hand off her other wrist and held out her palm. ‘Give me back my dagger.’

‘No.’ Ewan held it out of reach, and Honora lunged for it. With her full weight bearing on him, she took him down. Before she could grab the blade from his grasp, he rolled over, his body crushing hers.

Trapped, she felt every line of his body. And the dangerous glint in his eye made her aware that she had made a very bad decision.

‘I’m not the boy I was, Honora.’ He kept her pinioned, and tossed the knife away. ‘You won’t defeat me in a fight. Not any more.’