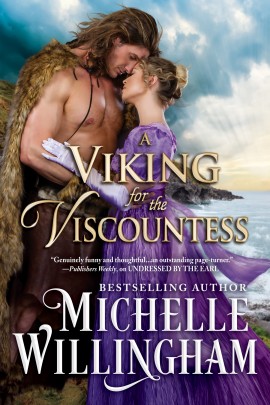 A Viking for the Viscountess

Juliana Arthur, the Viscountess Hawthorne, has been thrown out of her husband’s estate and her marriage declared invalid. With a small son to care for, she desperately needs a strong hero to rescue them from poverty and suffering.

A Viking wasn’t quite what she had in mind.

Arik Thorgrim is caught between worlds. After dying from a battle wound, he expects to find the glory of Valhalla where he can dwell among the gods. Instead, he’s brought forward a thousand years in time, to a beautiful woman who tempts him beyond reason.

Juliana doesn’t know what to do with this sinfully handsome Viking warrior who brings weapons into a ballroom and refuses to be tamed. But beneath his barbaric ways is a man of honor, a man who vows to face down her enemies and fight for her son’s future. But as Arik wages a battle against her heart, Juliana is afraid of loving a man whose time has already run out…

Enjoy a behind-the-scenes video of the brand new book cover!