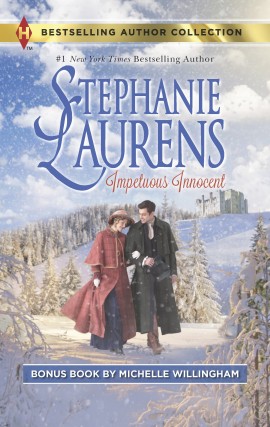 Dominic Ridgeley has done a gentlemanly deed, belying his rakish reputation. He’s delivered friendless orphan Georgiana Hartley into the protection of his vivacious sister. Under Bella’s accomplished tutelage, thinks the viscount, Georgiana is sure to attract a suitable husband. How right he is.

Georgiana’s guileless charm and pretty figure quickly launch her to the acme of London society. She’s fairly besieged by suitors. Dominic is shocked by his plan’s success-and his growing feelings for the effervescent girl. But with multiple proposals, valuable property and damned propriety all standing between them, will this innocent ever be Dominic’s?

BONUS BOOK INCLUDED IN THIS VOLUME!

The Accidental Princess by Michelle Willingham

Lady Hannah Chesterfield gladly succumbed to scandal in the arms of Lieutenant Michael Thorpe. Her social ruin means nothing…unless her common soldier is, in fact, a prince.