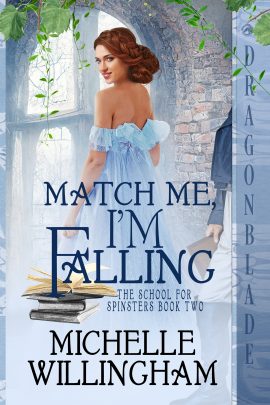 To the London ton, Cameron MacNeill is an awkward, wallflower of a man with no hope of finding a wife. But the Scottish laird holds deadly secrets, and he uses his beggar-like appearance to remain unnoticed. He enlists the help of the School for Spinsters to help him find a wife who will agree to be married in name only—because he needs a mother for his son while he is away working on behalf of the Crown.

Lady Ashleigh Pryor will do anything to escape the abusive household of her father—even marry a man she barely knows. But Cameron’s lightning reflexes, the powerful muscles he hides behind ill-fitting clothing, and his mysterious manner suggest that he is not a beggar at all, but a man hiding a past he wants no one to know about.

As she starts to uncover the pieces of Cameron’s secret life, Ashleigh no longer wants a marriage in name only—she wants a true husband in her bed. But Cameron can’t let himself fall in love—for if his wife learns the truth about who he is, his secrets might put her very life at stake.