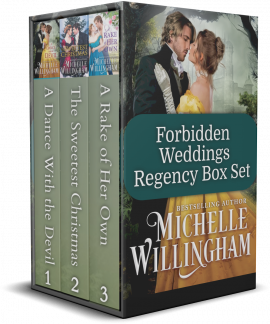 Marriage was never a possibility…until they met each other.

A Dance with the Devil
Devon Lancaster is fascinated by the beautiful vicar’s daughter, Jane Hawkins, who has been summoned to the will reading of the late Lord Banfield. But is she truly only a vicar’s daughter? Or does her past hold secrets that put her very life in danger? Jane knows she is unlikely to find a husband among the handsome men at Castle Keyvnor because of her poverty. But when she is locked in the wine cellar with Devon, she finds that the Devil of Lancaster sets her blood on fire. She’s afraid to surrender to his touch for fear of being abandoned. But one meddling ghost just might make a match between two reluctant lovers who are destined to be together…

The Sweetest Christmas
Lady Marjorie despises the idea of marriage. After being engaged to a man who tried to command every aspect of her life, from what she wore to what she ate, she refuses to consider matrimony again. Though she isn’t at all opposed to playing matchmaker for her cousin…Sir William Crandall is startled when Lady Marjorie believes he is a shy, withdrawn knight in need of a wife. He has nothing at all in common with her bluestocking cousin, but he is fascinated by the spirited Lady Marjorie. Despite her attempts at matchmaking, he intends to avoid marriage at all costs, after being abandoned at the altar. But a stolen kiss, a feast of gingerbread, and two unexpected friends find that there is magic in the Christmas holiday and a match that neither of them expected.

A Rake of Her Own
Ariadne Cushing is horrified when her controlling mother arranges a betrothal to a man she barely knows. She will do anything to avoid the engagement—even if that means causing her own ruin. But how can a shy bluestocking gain the attention of a wicked rake? Evan Middleton, Viscount Harcourt, is hiding his poverty from the rest of the world. With nothing but the clothes on his back and a horse to call his own, he needs a wealthy bride to save his family from his father’s debts. Ariadne strikes a bargain with him that he can’t refuse…but will her proposition result in an unexpected temptation?